Escape to the Coast at Fundo Los Leones

Our next stop on the Mirr Family Patagonia Adventure was the coast of Chile at Fundo Los Leones. From Palena, we drove four hours through mountain valleys, glacial rivers, rainforests, Nalca, cascading waterfalls, and farms mainly using the Carraterra Austral.  Noted as one of the world’s ultimate road trips, the highway runs 1,240 miles near the Patagonian coast of Chile.  Our travels took us past the famed Futaleufu River and Lago Yelcho to the La Junta lying at the crossroads between Chaiten and Coyhaique.  Grabbing some additional supplies, we traveled west following the Palena River passing numerous thermal hot springs, river crossings and waterfalls on our way to Raul Marin Balmaceda. The road dead ends not too far from the mouth of the river where we take a free ferry crossing to Los Leones. The entrance into Fundo Los Leones is only a few minutes from the ferry and winds through forests and picturesque meadows.  Beautiful Spanish horses roam the hillside alongside sheep, as the road terminates at Fundo Los Leones, resting on the banks of the Pitipalena Fjord. We were greeted by Marie, Mauricio and their son Nicholas, who took us into our small hobbit-like shingled cabins. The grounds were filled with trees, gardens, and greenhouses with hens, baby chicks, puppies, cats, and sheep. Our quaint cabins, each heated by individual wood burning stoves, are designed to blend in with the surroundings each providing incredible views of the fjord from each window. There are multiple cabins to choose from including individual cabins on the beach, and we chose a cluster of three cabins replete with a common area just above the silent lapping waters. After unpacking into our cozy housing, we relaxed on the beach front enjoying Chilean red wine and appetizers and gazed out in the small bay filled with penguins, dolphins, sea lions and islands that tower over the water. Marie called us in for dinner, where we were greeted by a spread of Chilean organic food from the farm including lamb, potatoes, and salad. The next morning, Christmas Eve, we woke up to one of Marie’s breakfasts and fresh made bread by their other son Felipe. We hiked from the farm to the Gulf of Corcovado and the Pacific Ocean along a winding path (sendero) that weaved through an incredible rainforest full of moss, ferns, lenga, coigue común and other trees local to the area. The forest was completely quiet except the rain drops on the leaves and birds above, and nary an insect to be seen. We made our way through these incredible canopy of trees to open stretches of the coast. Our return hike took us back through the wide sandy streets of the small town of Raul Marine Balmaceda filled with quaint hostels, markets, a local school and a ferry port. After this long hike we had a relaxing afternoon in our cabins by the fire journaling, reading, and listening to Christmas music. After dinner, we listened to our Christmas music and theirs. Marie knew the words to every song we played and laughed and sang until midnight. It is always incredible to share traditions with other cultures and Ken found they shared his taste for 70’s rock!

The next morning, Christmas Day, was bright and sunny. Mauricio had set up a boat tour of the fjord. We were picked up right off the beach of Fundo Los Leones and weaved our way through the islands around the fjord. We saw penguins and two different types of dolphins and a family of sea lions that we saw nesting on a small island.  Apparently when the pups are young, the mother sea lions will separate them from the rest of the sea lions and take them into the forest for safe keeping. We also toured a cave with a shrine for a local maritime saint. After the tour, we had an asado (barbeque) in the common area (quincho) with our adopted Chilean family. Nicholas had a spread waiting for us consisting of lamb, beef loin, and sausage. We also had the chance to try Felipe’s Christmas sweets once more. 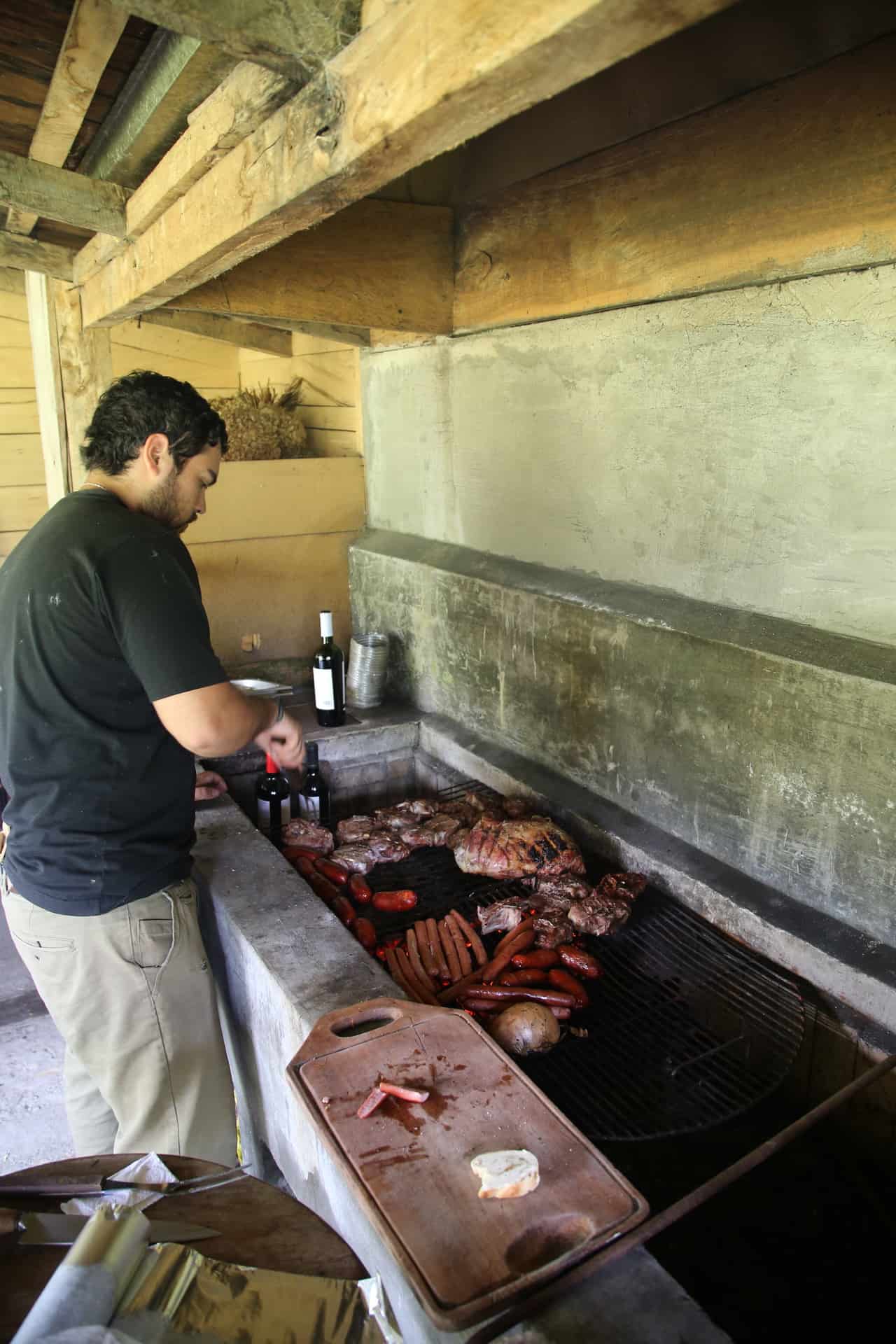 The afternoon started with a kayaking adventure of the fjord and then a sunset hike along the ocean coast. The beaches along the coastline are covered in small black pebbles and sand from nearby volcanic activity. The black color of the beaches backed up to the green seagrasses and bushes filled with yellow flowers created an incredible natural contrast. It was a profoundly calm evening, with absolutely no breeze or waves. The ocean lapped along the coastline as we gazed out at the Archipelego Islands scattered in the horizon. The sunset hike was one of the most amazing sites I have ever seen and the perfect end to an incredible Christmas filled with peace.

The next morning we woke up and drove back to Palena with Mauricio and Marie along the same winding and green highway.

Fundo Los Leones is an incredible place, unlike any we have ever seen. It combines the rural farm life of Patagonia with aquatic ecotourism along one of the most pristine coastal areas in the world. When people think about Patagonia and the sense of adventure that goes along with it, Fundo Los Leones is the epitome of this ideal. Our trip to the coast would start a journey from the mouth of Palena River to the border with Argentina. This is where the Corcovado River begins and leads to the source of both rivers at Lago Vintter on Poncho Moro near Estancia El Palenque, our next stop.