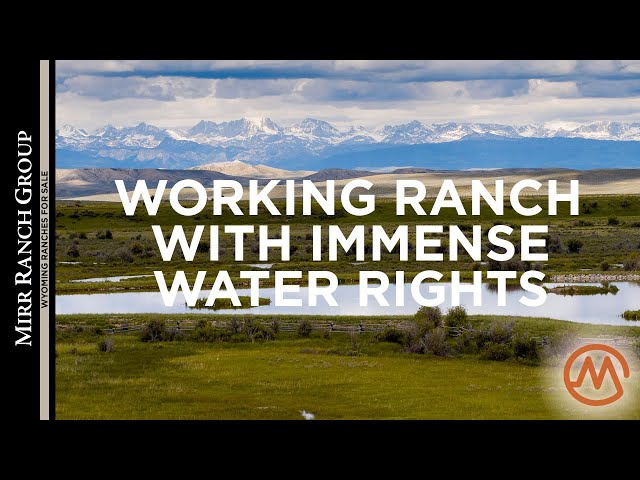 The Cottonwood is an 85-square-mile ranch situated in the shadow of three mountain ranges in the Upper Green River Valley of northwest Wyoming, just 70 miles south of Jackson. Offering 11,138 deeded acres and 43,745 acres of adjoining public lands, the ranch is in one block with 40 miles of meandering rivers and streams. These freestone waterways offer some of the last remaining great habitats for Colorado River Cutthroat as well as Rainbows and Browns. Through pioneering conservation efforts, the owners have enhanced and conserved miles of rivers, riparian corridors, wetlands, wildlife habitat, and open spaces, while also improving the ecological and economical sustainability of the overall ranch. A well-balanced cattle operation with a capacity to run 2,000 cow/calf pairs or 5,500 yearlings, this is an exclusive investment opportunity with 6,310 acres irrigated/sub-irrigated lands and over 76.9 cfs of historic water rights.

The Cottonwood is an 85-square-mile ranch of over 54,883 acres in one contiguous block situated in the shadow of three mountain ranges in the Upper Green River Valley of northwest Wyoming. This historic cattle ranch has extraordinary water rights irrigating 6,310 acres and has 40 miles of meandering freestone rivers and streams offering some of the last remaining great habitats for Colorado River Cutthroat and exceptional fishing for Rainbow, Brown and Brook Trout. It is conveniently located just seventy miles south of Jackson and nine miles south of Daniel, Wyoming with local jet airport access.

The 11,138 deeded acres is surrounded by public lands and is nestled in a protected valley adjoining the Bridger-Teton National Forest and the foothills of the Wyoming Range. The ranch has an extraordinary diversity of wildlife and critical habitat for large populations of moose, antelope mule deer, elk, sage grouse and migratory birds.

The ranch topography is generally flat open meadows and pastures along the stream and riparian corridors with adjoining sage pastures followed by rolling open native grass hillsides, ultimately including aspens and pines at its interface with the National Forest. There are incredible scenic vistas to the west, north and east with unobstructed views of the surrounding mountains.

The ranch and cattle operations are enhanced by the adjoining 43,745 acres of adjoining and integrated BLM and State grazing leases. The ranch is easily accessed off of Highway 189 and a county road runs the full 22 miles length of the property providing access to the entire ranch. The elevation ranges from 7,100’ near the entrance on the eastside of the ranch to 9,040’ on the west end adjoining National Forest.

The headquarters compound is located ¼ mile from the entrance off highway 189 and rests besides the Cottonwood River and irrigated fields The headquarters consists of numerous working facilities lying near the river and irrigated fields with the owner’s home resting on a small hill overlooking the expansive ranch with views of the surrounding mountain ranges. The owner’s home or Hill House is a four bedroom and two and half bath home that was updated in 2008 with an expansive deck and attached garage. The main compound below consists of numerous guest and workers quarters including a three bedroom, two bath log home with attached garage and covered porch; three bedroom, one bath cookhouse; two bedroom, one bath bunkhouse with porch; historic and operational log barn; repair shop; and numerous log and pole buildings and sheds for storage. The extensive main working cattle facilities with corrals, chutes and scale are located on a small ridge nearby with separate truck access for shipping.

In addition, on the west side of the ranch and about seventeen miles from the Hill House is the Beecher Place.  Beecher is a historic homestead in beautiful setting with irrigated meadows and backing up to the foothills of the Wyoming Range. It included a charming recently renovated historic two bedroom, one bath log cabin with deck; three single room cabins; log barn; and horse shed.  In addition, there are numerous historic cabins dotting the ranch including the Gabe Place and Peterson Place.

The Cottonwood is located in Sublette County of northwest Wyoming, just 9 miles south of Daniel, 14 miles north of Big Piney, and 70 miles south of Jackson along State Highway 189. Some of western Wyoming’s most spectacular mountain ranges are located within this glacial valley, including the Wind River Range to the east, the Gros Ventre to the north, and the Wyoming Range immediately to the west. The valley is home to a rich grassland climate that supports large tightly held ranches and a extraordinary and diverse wildlife population combined with numerous rivers and creeks providing incredible fly-fishing opportunities.

The roughly 4,000-square-mile Green River Basin is a dry sagebrush steppe, carved by numerous rivers and creeks created by snowmelt from the surrounding mountains creating hay fields, pastures and ranches along its edges. Numerous slow, meandering streams are interspersed on the basin floor and eventually come together to form the headwaters of the Green River, which flows just east of ranch. Most of the floodplains along the streams are irrigated meadows, while the low rises adjacent to these waterways and the higher rises on the refuge are characterized by sagebrush grasslands.

The Upper Green is a corridor for migration of both domestic and wild animals. Each spring, ranchers drive several thousand head of cattle from high desert mesas up the rivers into the mountains and the Bridger-Teton National Forest. The valley has such an incredible diversity of wildlife it is quite simply the Serengeti of the West. Hardy forage make the basin an important winter range for as many as 100,000 ungulates, including the largest herds of pronghorn antelope and Shiras Moose in the US. Elk, deer, moose, and pronghorn follow the path of the river during their seasonal migrations and the longest ungulate migration corridor in the lower forty-eight runs through the valley and the ranch as mule deer and pronghorn antelope pass through in the spring and fall.

In addition, many other species of wildlife follow the river corridor. The ranch and area is home to a myriad of bird species like sage grouse, trumpeter swans, sandhill cranes, and a vast array of migratory birds appear throughout the valley.

Daily commercial air service in available in Jackson Hole with four major carriers; the Ralph Wenz Airport in Pinedale services most jets with a 8,900’ x 100’ runway and is twenty-six miles away; and the Miley Memorial Field in Big Piney/Marbleton with its 6,805’ x 75’ runway  is just eleven miles from the ranch.

The Cottonwood offers world-class fishing and year-round outdoor recreation. With plentiful snow-pack draining the surrounding mountains, small high-country creeks combine to create tributary streams which flow out of the foothills and into the valley floor. As the gradient reduces, the water slows and begins meandering through willow-lined hay meadows.

The ranch contains nearly 40 miles of river and streams with 25 miles alone on Cottonwood Creek a freestone waterway with boulder strewn riffles, deep pools, willow-lined banks, and protective undercuts. The never-ending oxbows, overhanging bushes, and deep cut banks provide ideal habitat for four species of trout including the native Colorado River Cutthroat as well as Rainbow, Brown and Brook Trout. The ownership has protected these riparian areas and have maintained streams at levels and temperatures that sustain a healthy fishery. Over one million dollars have been spent in fishery improvements within the watershed. With outstanding water rights, buyers may further enhance the already exceptional fishery habitat.

The area also offers big game hunting with record-class mule deer and antelope, plus elk and moose. The ranch provides critical and important year long habitat and migration corridors for elk, moose, mule deer, pronghorn antelope, and sage grouse. It offers uninterrupted ecological connectivity with the Green River Basin and the Greater Yellowstone Ecosystem. The riparian zones amidst the upland grasslands elevates the ecological values providing superior wildlife habitat diversity for several key species and longest ungulate migration corridor in the US passes through the valley. The Sublette Shiras Moose and the pronghorn antelope herds are the largest in the US outside of Alaska.

The Upper Green River Valley is one of the premier ranching communities in the West with some of the finest operating ranches in Wyoming. Numerous rivers, streams, and creeks flow down from the surrounding mountains providing the necessary water to irrigate the lush hayfields. Ranches cover much of the valley floor which is ringed by forested hillsides, mountains, and National Forest lands.

This is a historical ag-operation, that not only offers vast agricultural benefits, but is also an important piece of the local ecology. The Cottonwood is well-balanced working ranch with a capacity of 22,483 AUM’s and has run 2,000 cow/calf pairs and currently hosts 5,500 yearlings. The ranch historically was run as a cow/calf operation, but recently has been used for summer grazing and running yearlings. It is rich in water with over 76.9 cfs of historic water rights that irrigate and subirrigate 6,310 acres providing significant amounts of grass to sustain a healthy cattle operation and/or used to operate a substantial hay enterprise. With access to miles of streams, 24 reservoirs, 11 springs, and numerous tanks, there are endless supplies of livestock water.

The ranch has over 157 miles of fencing, much of which has been updated and 18 miles of which is wildlife-friendly. This has smooth wire on the bottom placed slightly higher to allow antelope to go underneath and top-rail protections to prevent entangling deer, elk and moose who may attempt to jump fences. The headquarters near the entrance holds most of the shipping and working facilities used in a the cattle operation with certified scales, chutes and extensive corrals with ease of access for loading livestock in close proximity to a state highway.

The ranch has substantial and valuable water rights consisting of approximately 76.9 cfs that date back to the 1880s. These rights irrigate 6,310 acres of hay meadows and pasture, with the balance and adjoining public land leases are dry land and vital to the existing cattle operation. There are over 17 miles of ditches and canals that distribute the water on the ranch. A breakdown of these water rights can be provided to qualified prospects. The ranch produces a mixture of timothy grass and clover and is renowned for its quality.

Through pioneering conservation efforts, the owners have enhanced and conserved miles of rivers, riparian corridors, wetlands, wildlife habitat, and open spaces, while also improving the ecological and economical sustainability of the overall ranch.

Due to its close proximity to the towns of Daniel, Pinedale and Big Piney, and to the heavily visited public lands and travel corridors to Yellowstone National Park, the property creates a critical open space and habitat buffer. The remaining ranch is an ideal candidate given the numerous conservation values including scenic, wildlife, and historic agricultural uses. This very scenic ranch is a welcome respite from the suburban and ex-urban development from nearby Pinedale and the Jackson Hole area.